Before you read any further, if you’re one of the many people who get directed here trying to find out if Robbie Coltrane is in The Princess Bride, IMDB says he isn’t. But now you’re here, I hope you enjoy the rest of the post. 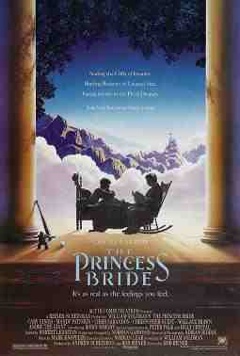 Yesterday was International Talk Like a Pirate Day, and I couldn’t think of much to write about it, other than linking to news of the Pirate Party winning local elections in Berlin (and a short but magnificent joke). I realise now that I was blind, for one of my favourite films involves a pirate and it is truly worthy of a thousand blogs. I am, of course, talking about The Princess Bride.

To briefly recap the plot: boy meets girl, boy loses girl, boy becomes a pirate, boy fights rats, boy rescues girl with the help of a vengeful swordsman and a giant. It’s not particularly complicated but it doesn’t need to be – it’s a fairytale, albeit a slighly snarky and subversive fairytale.

It follows a lot of fairytale traditions, of course, and acknowledges that from the start: the framing device involves a grandfather reading The Princess Bride to his sick grandson. The boy is outaged – he thinks it’s a ‘kissing book’ – but he relents and becomes both audience and commentator to the action. And that’s fair enough, because stories are meant to be interactive, at least to a degree.

(The novel, like the film written by William Goldman, plays with this idea a lot more – the narrator discovers that the original story of The Princess Bride was a political satire and that his own grandfather used to cut out the boring bits when reading it to him. Assume the film as an adaptation of the novel and so many people, both real and fictional, get in on the storytelling action that we never actually get to see the real story. Which is probably for the best, as what we get sounds way better than the original by S. Morganstern.)

The characters are as slippery as the narrative – that’s fair enough, this is a fairytale and its inhabitants are meant to be liminal. A shy, quiet farmboy becomes the biggest badass in town, enemies become allies, disguises are key to the plot, and even the gulf between life and death can be bridged by the semantic difference between the words ‘all dead’ and ‘mostly dead’. After all, this is about storytelling and so language is important: “As you wish” becomes code for “I love you”, we’re reminded that ‘concerned’ isn’t the same as ‘nervous’, and one of the best lines is all about using words you don’t really understand:

The only thing we can be clear on is True Love, which is eternal and unbreakable, which is the whole point of the movie. You know it’s heading for a happy ending, but that predictability doesn’t matter when the journey’s so much fun.

Because despite my lit-crit wibblings above, The Princess Bride is a really funny film. The casting is spot on (when Harry Potter needed to cast a giant, they called Robbie Coltrane. When The Princess Bride needed to do the same, they got, well, Andre the Giant), and the script is amazing, full of quotable one-liners and punch-the-air declarations if love and revenge. For instance:

“You rush a miracle man, you get rotten miracles.”

“This is true love – you think this happens every day?”

“Do you want me to send you back to where you were? Unemployed, in Greenland?!”

“Never go against a Sicillian when death is on the line!”

“Have you ever heard of Plato, Aristotle, Socrates? Morons!”

“I fight gangs for local charities and stuff.”

“Please consider me as an alternative to suicide.”

“Tyrone, you know how much I love watching you work, but I’ve got my country’s 500th anniversary to plan, my wedding to arrange, my wife to murder and Guilder to frame for it; I’m swamped.”

(The problem with quoting The Princess Bride is that, like Pringles, once you stop, you can’t stop.)

But despite its subversive attitude, the film works because it has heart; declarations of true love may be over-the-top but they’re sincere (that’s why the movie topped the Top Ten Romantic Movies for Geeks list at Funk’s House of Geekery), and the climactic swordfight between Inigo and the Six Fingered Man features the legendary line “Hello. My name is Inigo Montoya. You killed my father. Prepare to die”. Apparently actor Mandy Patinkin spat that line at the cancer that killed his father and it shows – he means it. That’s what makes The Princess Bride a classic, towering over other films that go for a similar vibe (like, say, Pirates of the Caribbean). And that’s why people love it.

“Grandpa, maybe you could come round and read it to me again tomorrow.”
“As you wish.” 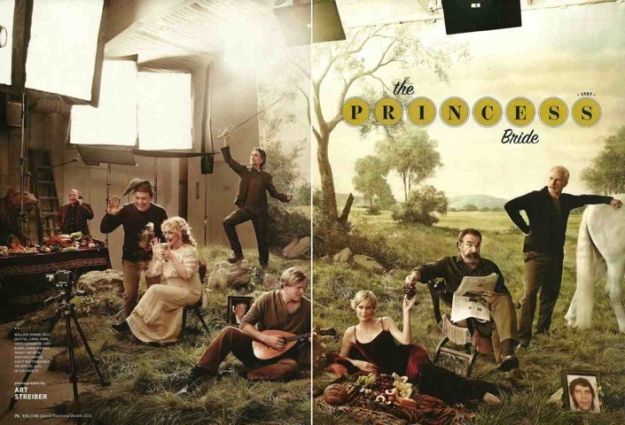 2 thoughts on “Inconceivable! Some Thoughts On Why The Princess Bride Is Awesome”