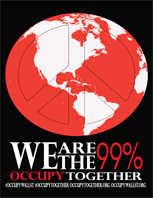 When the winners write their history books, the one thing they’ll agree on is that 2011 was a really weird year.

It’s been a whirlwind of revolutions and crumbling authority, and while it’s way too early to try and get some perspective on the events that started with the self-immolation of Mohamed Bouazizi and seem, somehow, to have resulted in the peaceful Occupation of Wall Street, Boston, LA and other US cities, that’s never stopped me before!

I can’t help thinking that all this isn’t (just) about rich verses poor; after all, if you can use an iPhone to Tweet about the protests then you’re not poor, at least not globally speaking, not when 1,345 million people in the developing world live on less than $1.25 a day. However, let’s not kid ourselves; the same corruption that forces the American middle class onto the streets to protest the potential loss of their homes also contributes towards poverty in the third world. And the developed, western nations aren’t exactly utopias – 80% of NHS hospitals face severe financial difficulties, rising food prices in Scotland are forcing Scotland’s poorest to miss meals, and youth unemployment has reached 21.3%. Similar issues affect America and Europe, and at times it feels like the giants have lost their golden goose and are waiting for the beanstalk to fall. Add to that issues like the closure of libraries and the bread and circuses of mainstream media and it’s starting to feel like one of those years, like 1914, 1939, 1968, 1989, years when everything shifted and changed.

I suspect a lot of this is about people being disenfranchised. The Arab Spring was largely about people rising up against corruption amongst their rulers; the Occupy movement sweeping the States is a reaction against corporate corruption. Heck, even the UK riots, which didn’t really have a criminal component, kicked off in areas where prospects are limited, to say the least. Keep denying people a voice, either deliberately or as the default outcome of political ideology, and things will start to happen.

It’s interesting that all this is happening in the age of social media; the beauty of the Internet is that everyone can contribute to it, and that’s why, when those historians are writing about 2011, they’ll need to dig out Twitter archives rather than film from the mainstream media (and why fears of a Digital Dark Age should be heightened during all this – these are historical records, not digital emphemera). It’s interesting that the mainstream media has been lagging behind when it comes to coverage of Occupy Wall Street and its sister movements, but perhaps not surprising. After all, it’s part of the same corporate culture that people are reacting to – the phone hacking scandal and the resulting can of worms showed that human diginity and privacy are expendable when it comes to profit.

And yet if this is about people needing a voice, the rise of social media and citizen journalism raises questions for its most enthusiastic proponents; there’s still a Digital Divide, both globally and within individual nations, and that’s only going to get worse with sweeping cuts to library services (and don’t forget, those and other public service cuts arose from a global recession caused by corporate malpractice). I love Twitter, but I bet my mom’s never heard of it, and if social media is going to be the new grassroots ‘mainstream’ then don’t forget that you’re not going to get a lot of political insight from the Top 100 Most Followed Tweeters.

That’s a key point in other ways – the battlelines have been drawn, but the opposition doesn’t understand what’s going on. David Cameron described the UK riots as “criminality, pure and simple”; Veterans for Peace were beaten by police describing them as “anarchists”; Libyan rebels were said to be on “hallucinogenic drugs”. The response from authority figures to the protests has ranged from disingenuous to deranged conspiracy theories; I guarantee none of them are avidly following the Occupy Together hashtag. And that’s a problem with the Internet as a source – search engine technology has progressed to the point where it can now pretty much tell you what you want to hear. Things are becoming more and more filtered in an age when what we really need is to be challenged, to hear opposing voices, to enter into rational and constructive dialogue. It’s difficult to do that if everything we read backs up our existing prejudices, and while the mainstream media do that anyway (hello Daily Mail! Hello Fox News!), the mosaic nature of the Net may well exacerbate things.

But in the end it does feel as though things are changing. People are more willing and more able to let their voices be heard, and the leaders that dismiss those voices are actually starting to look irrelevant. Heck, maybe the institutions we’ve relied on for so long are starting to crumble and/or evolve – the general assemblies of the Occupy movements would seem to be more truly democratic and representative than Cabinets made up of millionaires – and the onus is on us, all of us, not just those who are protesting on the streets, to make something good and positive as a result. Something good and positive that brings in the disenfranchised and treats them as friends, not enemies.

1 thought on “What’s Going On? Protests, Riots, the Internet and a Changing Civilisation”