Today is National Libraries Day, so here’s a repost of a blog I wrote a while back…

“We read to know we are not alone.” So said CS Lewis, and with that in mind this report in the Guardian casts a worrying shadow. The National Literacy Trust has found that 1 in 3 children aged between 11 and 16 do not own a book of their own – that’s 3.8 million people. It’s a terrifying statistic, especially given the importance of literacy in tackling deprivation and worklessness. In an age of massive youth unemployment, a story like this has serious ramifications. It’s not a question of intelligence – young people are now digital natives, and so can manipulate visual information on a computer screen better than I ever will – but those skills aren’t the same as those fostered by reading.

Without going into the figures in any detail (although my job means I come across similar stories, like the CBI’s findings that employers are funding remedial English and Maths classes for new workers who do not have adequate literacy and numeracy skills), it’s a shocking story. Sure, reports like this use emotive examples (like the boy who brought an Argos catalogue to school because it was the only book his parents owned), but even so it’s a state of affairs I have difficulty comprehending. 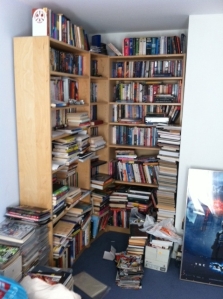 My parents never had a problem with me being a bookworm. They probably thought I was too easily distracted, and had problems with me readwalking, but on the whole I was encouraged to enjoy books, comics and magazines. Vists to our local library were a Friday ritual, and I can thank that ritual for giving me a lifelong interest in reading and for fostering my inner information junkie. My childhood bedroom was filled with Doctor Who novelisations, Transformers comics and notebooks in which I wrote stories and poems and fragments of conversations. Nowadays I’ve got my own house, but not much has changed except it’s a bit tidier than my old bedroom. Only a bit though.

Books – and yes, comics, magazines and the internet – can be a means of escape, a way of exploring a new world, a means of enchanting our reality and making it new and strange and wondrous again. Fiction gives us myths and adventure and romance, non-fiction provides us with knowledge and new horizons. If children in the UK are being denied this, because of poor parenting or inadequate teaching or government cuts then it’s not only unfortunate, it’s not only sad, it’s a national tragedy. It has profound implications for how we create, invent, compete and dream. And yet the country closes libraries while a quarter of kids in London can’t read.

This is why the Save Libraries campaign is so important, why encouraging children to read is vital, why Hurley’s Heroes distributing comic books to youngsters in shelters following May’s tornadoes in Missouri may not just be a fantastic act of charity but might be a spark that ignites the imagination of a kid who’d never gone near a book before. This isn’t just about the economy and having a skilled workforce, although that’s a big deal in itself, it’s about quality of life and creating the future. The report suggests that the potential of a huge number of children and young people is being squandered and that’s not only a shame, it’s a crime.